The Chinese state media reported on Tuesday (11 July) the deployment of military troops and warships to the country’s first ever overseas base – officially referred to as “a naval logistics support facility” – located in Djibouti.

In a ceremony held at Zhanjiang Naval Base in the southern province of Guangdong, Admiral Shen Jinlong, Commander of the People’s Liberation Army Navy (PLAN), read an order on setting up the base in Djibouti, and conferred military flag to the expeditionary unit.

The expeditionary unit to Djibouti consists of two naval vessels – a Type 071 (NATO reporting name: Yuzhao class) amphibious transport dock Jinggangshan (999), and a semi-submersible transport ship Donghaidao (868). The latter is similar to the U.S. Navy’s Montford Point class mobile landing platform (MLP) in concept, and can be used to transport air cushion landing craft and other small naval vessels. In additional to the sailors on the two vessels, the expeditionary unit also includes a Marine detachment of 300—400 soldiers. 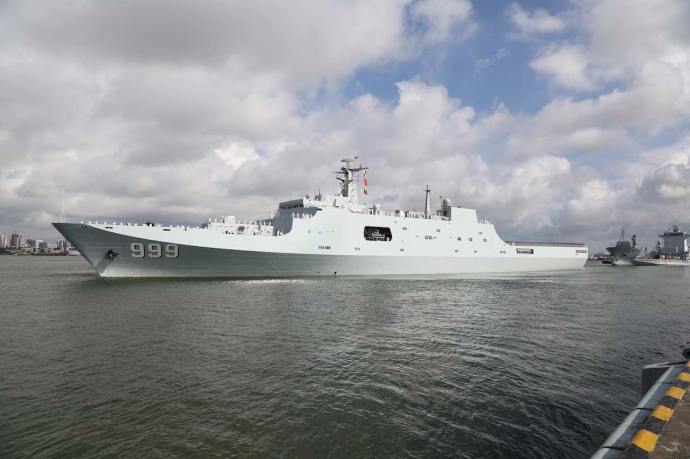 This is the first time the PLA officially deploys its personnel and warships to a foreign country on a permanent basis. It also marks a historical departure from the Five Principles of Peaceful Coexistence – a set of principles that govern China’s foreign policies since the 1950s and later formed the basis of the Non-Aligned Movement.

During the Cold War era, the Chinese government had firmly rejected the deployment of foreign military forces, including those of its then close ally the Soviet Union, on its soils, nor did not want to station its own military forces in other countries. Until 1981, China abstained from voting on peacekeeping resolutions or contributing peacekeeping funds or personnel. For the next decade, it continued to abstain on most resolutions, so as to appear neutral to all parties.

After adopting the ‘Reform and Opening Up’ policy in the 1980s, the Chinese government’s attitude towards deployment of its military to foreign countries gradually shifted. In 1992, China took part in its first UN peacekeeping mission to Cambodia. By 2015, China had committed 8,000 troops to the UN peacekeeping standby force – one fifth of its 40,000 total strength.

In 2009, the PLA Navy deployed its first task force of three surface vessels to take part in the anti-piracy operations in the Gulf of Aden near Somalia, and has maintained its presence in the region since then. However, it has been limited to play a bigger role due to a lack of foothold in the region – Chinese warships could only be resupplied in civilian ports in countries nearby.

On April 8, 2016 China’s Ministry of National Defence (MND) confirmed that construction of a naval logistics support facility had begun at Djibouti – a small country that is strategically located on the Horn of Africa. Other countries including the U.S. and Japan had already established military bases in the country. It was reported that the deal between the two countries allowed Chinese military presence in the country until 2026, with a contingent of up to 10,000 military personnel.

According to the Chinese state media, the naval base in Djibouti will be used to support PLA Navy operations in West Asia and Africa for anti-piracy, peacekeeping, humanitarian aids, evacuation of Chinese citizens, and military co-operations with foreign countries.