First introduced into the PLA Navy service in 2014, Type 052D (NATO reporting name: Luyang-III class) is the latest variant of the Type 052 family, featuring a number of changes over the previous Type 052C (Luyang-II class) variant. Designed to provide area air defence, Type 052D employs an improved flat-array AESA and a universal 64-cell VLS capable of launching a variety of missiles from the same standard missile cells. These improvements put Type 052D on a par with the latest destroyers deployed by Western navies.

The most significant change on Type 052D is its universal 64-cell (8×8) vertical launch system (VLS). Unlike the VLS on Type 052C, which can only launch the HHQ-9 air-defence missile, the new VLS allows missiles of different types and sizes to be carried and launched from the standard missile cells. As a result, Type 052D can carry a variety of air-defence, anti-surface, and anti-submarine weapons according to its mission requirement, providing much greater flexibility and also a rapid-fire launch capability against the various hostile threats.

Type 052D is the ultimate design of the PLA Navy’s 052 family of destroyers, being constructed in a significant number to replace its ageing destroyers. Five hulls had already been commissioned into service as of January 2017, with another 12 hulls either undergoing sea trial or under construction. In addition to the Shanghai-based Jiangnan Changxing Shipyard, some of these hulls are being constructed at Dalian Shipyard in northeast China.

There are two universal 32-cell (4×8) Dual Hot/Cold-launch VLS located on the bow deck and amidships respectively. They are the first Chinese VLS to have been developed to to GJB 5860-2006 National Military Standard, which allows launch of missiles using either ‘Cold’ or ‘Hot’ launch method. The rectangle-shaped VLS cell is similar to the Hot-launched VLS on the Type 054A (Jiangkai-II class) missile frigate, but without the shared exhaust vents between the rows of launching tubes. Instead, it utilises a more advanced concentric canister launch (CCL) method, which was first pioneered by US Navy in the mid-1990 for Mk 41 VLS upgrade.

Missiles that can be carried and launched from Type 052D’s universal VLS include:

In addition, the VLS is rumoured to be also capable of launching the CJ-10 land-attack cruise missile (LACM) and CY-5/Yu-8 rocket-propelled torpedo, but this claim has not been confirmed.

A single 24-cell HHQ-10 short-range SAM is fitted on the stern deck atop the helicopter hangar. The missile launcher is similar to the U.S. Navy RIM-116 in arrangement. Derived from the TY-90 short-range AAM, the HQ-10 is fitted with a dual passive radar-/infrared-homing seeker and has a maximum range of 9 km. An improved variant is reportedly fitted with an independent active infrared seeker, with a maximum range of 10 km.

A seven-barrelled 30-mm Type 730 CIWS is installed on the bow deck ahead of the bridge. The weapon system has a maximum rate of fire of 4,200 rounds/minute and a maximum range of 2.5 km against anti-ship missile and 3.5 km against aircraft. Each CIWS has its own independent power-supply, as well as a H/LJP-349 fire-control radar and a Type 4 electro-optical director (EOD).

The main gun on the bow deck is an indigenous H/PJ-38 single-barrel 130-mm/70-calibre naval gun developed by Zhengzhou Institute of Machinery and Electronics (713 Institute) and built by the Second Inner Mongolia Machinery Plant. The H/PJ-38 is modelled after (but not a direct copy of) the Russian AK-130 automatic naval gun, and can be operated in fully automatic mode from the radar control system, from the shipborne optical sighting system, or laid manually. The gun can fire 86.2 kg projectiles at a maximum rate of 40 rounds/min to a maximum range of 30 km.

The four H/RJZ-726-4 18-barrel (3×6 arrangement) chaff/decoy launchers on the aft deck can also be used to fire ASW rockets if necessary.

Compared with the H/LJG346 APAR on Type 052C, the new radar features four larger radar arrays, presumably housing more radar transceivers. The curving radar arrays resulted by the need for air circulation on the earlier APAR on Type 052C have been replaced by flat arrays, suggesting the adoption of a liquid cooling system instead of the mixed air and liquid cooling system on earlier APAR on board Type 052C.

Other sensors onboard Type 052D include:

The destroyer’s stern hangar accommodates one Kamov Ka-28 (NATO codename: Helix) antisubmarine warfare (ASW) helicopter. Carrying various weapons including torpedoes and deep charges, the helicopter can operate in all weather conditions up to 200 km from the host ship. Alternatively, the destroyer can carry an indigenous Z-9C helicopter. 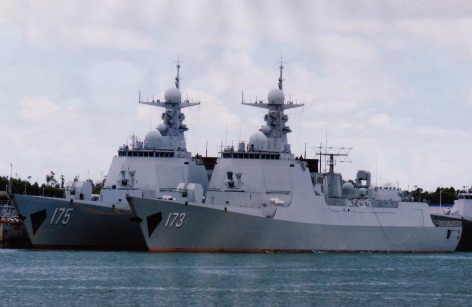 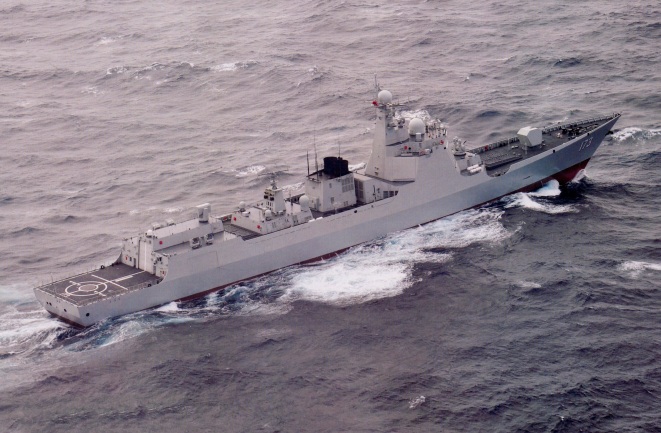 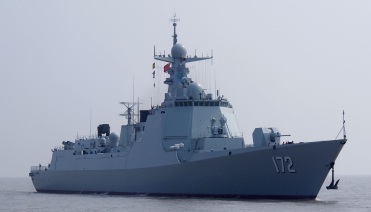