The PLA Navy began to develop the concept of a new-generation multirole missile destroyer in the late 1980s. The destroyers were designed by Wuhan-based China Ship Building Institute (701 Institute) and built by Hudong Shipyard (now Hudong-Zhonghua Shipyard) in Shanghai. Construction of the first-of-class DDG-112 Harbin began in 1986, and the ship was launched in 1991. System installation and sea trial lasted for three years before the ship finally entered the service in 1994. The delay was mainly caused by the complexity of integrating various foreign-made contents. The second hull DDG-113 Qingdao was commissioned in 1996.

DDG-112 Harbin was first revealed during the PLA exercise during the 1996 Taiwan Strait Crisis. On 21 March 1997, the destroyer and two other Chinese warships made a historical visit to San Diego, California in the first-ever visit by PLA Navy ships to the mainland U.S. Between May and October 2002, a fleet comprising DDG-113 Qingdao and AO-575 Taicang replenishment ship conducted the first global cruise in the PLA Navy’s history.

Type 052 is the first Chinese-built surface combatant that meets modern standards, representing a significant improvement in China’s shipbuilding and shipborne weapon technologies. The destroyer is fitted with sophisticated air defence, anti-submarine warfare, electronic warfare, and C3I systems. The advanced gas turbine propulsion provides the vessel with high power-to-weight ratio and enables them to accelerate and get underway quickly.

The hull design of Type 052 features certain European influence. The ship has a higher beam-length ratio which increases the stability of the ship in bad weather conditions, but sacrifices the speed performance of the ship. With a full displacement of 4,800 t, the destroyer was also the largest surface warship in service with the PLA Navy at the time of its commission.

Despite their significant improvement over the previous Type 051 Luda class destroyer, Type 052 is still regarded as inferior to the surface combatants introduced by Western and Russian navies in the same age. The ship’s air defence firepower, originally consisting of a 13 km-range Crotale/HQ-7 SAM launcher and four twin-37mm AAA guns, is only capable of point defence against limited number of targets. The ship’s variable depth sonar (VDS) was still inferior to the latest Western designs. Additionally, the shipborne Z-9C naval helicopter only had very limited antisubmarine warfare capability.

A key weakness of the Type 052 destroyer is its large amount of foreign-made systems, which were sourced from the U.S., France, and Italy. These systems were not made to operate together or with Chinese-made systems, and as a result, they were not well integrated. In addition, the two hulls of the class also differed slightly in weapon system configuration. For these reasons, the two Type 052 hulls primarily served as technology demonstrators, with no follow-up hull built.

Following the modernisation refit, the primary surface strike weapon system of Type 052 is the YJ-83 sea-skimming anti-ship cruise missile. Four quadruple launchers are installed at the mid-ship position. The missile uses active radar-homing to deliver a 165 kg warhead to a range in excess of 180 km.

The main air defence weapon is an 8-cell HHQ-7 short-range SAM system, designed to engage aircraft in all-weather, day/night conditions at a maximum range of 8—12 km with line-of-sight guidance. The missile also has limited capability to intercept sea-skimming anti-ship missiles at a much closer range (4—6 km).

For air defence the frigate is equipped with four Type 76A dual 37-mm anti-aircraft artillery guns, capable of firing 1.42 kg shells at a rate of 180 rounds per minute to a range of 8.5 km against airborne targets. These were later replaced by two Type 730 CIWS. The seven-barrel gun provides a firing rate of 4,600—5,800 rounds/minute and a maximum firing range of 3,000 m. Each CIWS has its own independent power-supply, as well as a Type 347G (EFR-1) fire-control radar (6 km detection range against airborne targets of RCS 0.1m2) and an electro-optic director (5—6 km tracking range).

The Type 052 is the first Chinese surface combatant to have been equipped with an integrated combat data system. The ZJK-4 is a Chinese copy of the Italian Alenia Marconi Systems (now Selex Sistemi Integrati) IPN-10, which integrates the target acquisition, navigation, communications, signal processing and weapon control functions. The combat system central computer computes and evaluates the target data and allocates data to the weapon systems. The system carries out multiple target search and track, target prioritisation and automatic engagement of weapons.

The helicopter deck at the stern has a single landing spot for a medium size helicopter such as Harbin Z-9C. The deck is fitted with the helicopter handling system. A fully equipped hangar accommodates two helicopters. 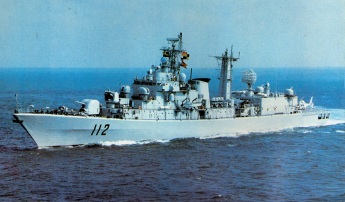 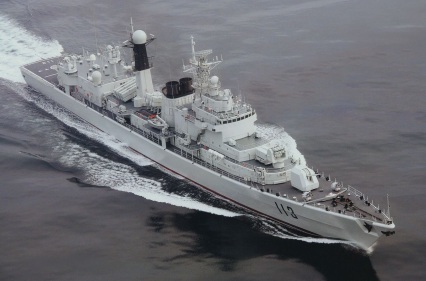