The FC-1 Xiaolong (Fierce Dragon) is the result of a joint Sino-Pakistani development programme that commenced in 1999, with each side contributing 50% of the total development cost. The aircraft was designed by Chengdu Aircraft Design Institute (611 Institute). Chengdu Aircraft Industry Corporation (CAC) of China is the prime contractor for aircraft development and manufacture, while Pakistani Aeronautical Complex (PAC) is the main partner responsible for post-sale service and maintenance, and more recently the licensed production of the aircraft in Pakistan. Russia supplied its Klimov RD-93 turbofan jet engine for the aircraft.

The initial order was from the Pakistani Air Force (PAF) for eight examples, which were delivered in 2007—08. A further order for 42 airframes in the Block-I configuration worth about US$800 million was signed in March 2009, and these aircraft were delivered in 2010—11. A second order for additional 50 examples in the improved Block-II configuration began delivery in 2016, and these airframes were all built locally in Pakistan. The PAF is expected to place its third order for further 50 examples in 2017. These airframes will also be built in Pakistan and in the more advanced Block-III configuration, which features an Active Electronically Scanned Array (AESA) fire-control radar.

The JF-17 has also reportedly received small-number orders from two foreign customers—Nigeria and Myanmar. In addition, PAC will also produce the two-seater variant JF-17B, which made its maiden flight in April 2017.

The FC-1 traces its origin to the Super-7 fighter programme, a joint Chengdu-Grumman development project worth US$500 million to upgrade the Chengdu J-7 (MiG-21F-13 ‘Fishbed-C’) fighter. Proposed upgrades included removing the fighter’s nose air intake and replacing it with a ‘solid’ nose housing the fire-control radar with two lateral air intakes, as well as upgrading the fighter with Western-made avionics and engine. The development agreement was signed in 1986, but the programme was cancelled in 1990 in the wake of the cooling political relations between China and the West, as well as in response to a 40% increase in the cost of the project.

Chengdu continued the Super-7 project independently and re-branded the design as FC-1. In 1999, China and Pakistan concluded a joint development and production agreement to co-develop the FC-1 fighter. Under the agreement, the programme was to be jointly funded by the China Aviation Import and Export Corporation (CATIC) and Pakistan, each with 50% stake of the joint venture. The total cost of the development programme was estimated to be US$150 million. Russian Mikoyan Aero-Science Production Group (MASPG) reportedly provided some assistance in the development of the aircraft

The first prototype of the FC-1 rolled out on 31 May 2003, and the aircraft made its maiden flight successfully on 25 August. A total of three flying prototypes were developed, along with a static prototype. Flight trial of the aircraft completed in 2005 and the aircraft entered production in June 2006.

In March 2007, CAC delivered two JF-17 fighters (#101, #102) to the PAF on 12 March 2007. They made their debut on 23 March during a fly-past as part of the Pakistan Day military parade in Islamabad. A further six aircraft were delivered to the PAF in 2008. Under the joint development agreement, the PAF will acquire up to 250 examples of the fighter in several batches, with the avionics systems gradually upgraded in later batches. The assembly of the JF-17 was to be shifted to PAC in later batches, and some production was also to be carried out by PAC in Pakistan, including the manufacture of the aircraft’s wings and fin.

The FC-1 adopts a rather conventional aerodynamic layout, with mid-mounted wings, lateral air intakes, single-frame bubble cockpit canopy, and two under-belly stabilising fins. The drag chute bay is located at the root of the rudder. An electronic equipment pod is mounted on the tip of the rudder. The production variant (JF-17) features a diffuser supersonic inlet (DSI) similar to those of the U.S. F-35 fighter for better air-intake efficiency.

The FC-1/JF-17 is equipped with a Chinese indigenous KLJ-7 X-band multifunctional pulse-Doppler (PD) radar developed by Nanjing Research Institute of Electronics Technology (NRIET, a.k.a. CETC 14 Institute). The radar uses a mechanically-steered planar array antenna and may have links to Russian technology. The radar can work in either beyond visual range (BVR), close-in air-to-air modes, or ground surveillance mode, and has a robust anti-jamming capability. The radar can reportedly manage up to 40 targets, monitor up to 10 of them in track-while-scan (TWS) mode, and simultaneously fire on two BVR targets, with a maximum detection range of 75 km for air targets and 135 km for sea surface targets.

CAC claimed that the FC-1/JF-17 can also be integrated with foreign-made fire-control radar, including the Italian Grifo S-7, Thales RC400, GEC Marconi Blue Hawk, and Russian Phazotron Zemchug/Kopyo, which would allow the aircraft to fire Western/Russian weapons.

The Block-III variant of the JF-17 will be fitted with a Chinese-made AESA fire-control radar in place of the original KLJ-7.

The FC-1/JF-17’s avionics architecture is supported by two mission computers based on Multi-Bus System (MIL-STD-1553B). The heart of the system is a 32-bit Weapon and Mission Management Computer (WMMC) which performs mission computations, flight management, reconfiguration / redundancy management and in-flight system self-test.

Fixed weapon includes a GSh-23 dual-barrel 23mm cannon. Alternatively, the aircraft can be fitted with a GSh-30 dual-30mm cannon. There are 7 stores stations, including one under the fuselage, 4 under the wings, and 2 wingtip mounted, with up to 3,700kg weapon payload.

The Block-II variant also features a detachable in-flight refuelling probe on the starboard side of the cockpit.

Liyang Aero Engine Corporation in Guizhou is reportedly developing an indigenous turbofan engine designated WS-13 (or Tianshan-21) as an alterative powerplant option for the FC-1. The engine was said to have been based on the RD-93 design with some modifications. 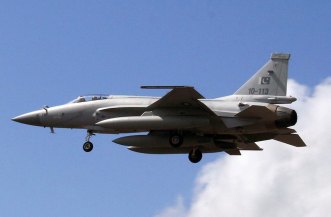 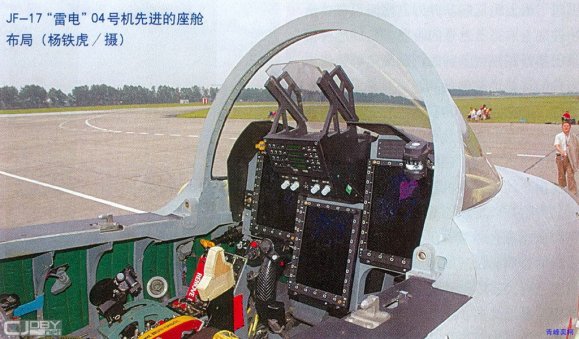